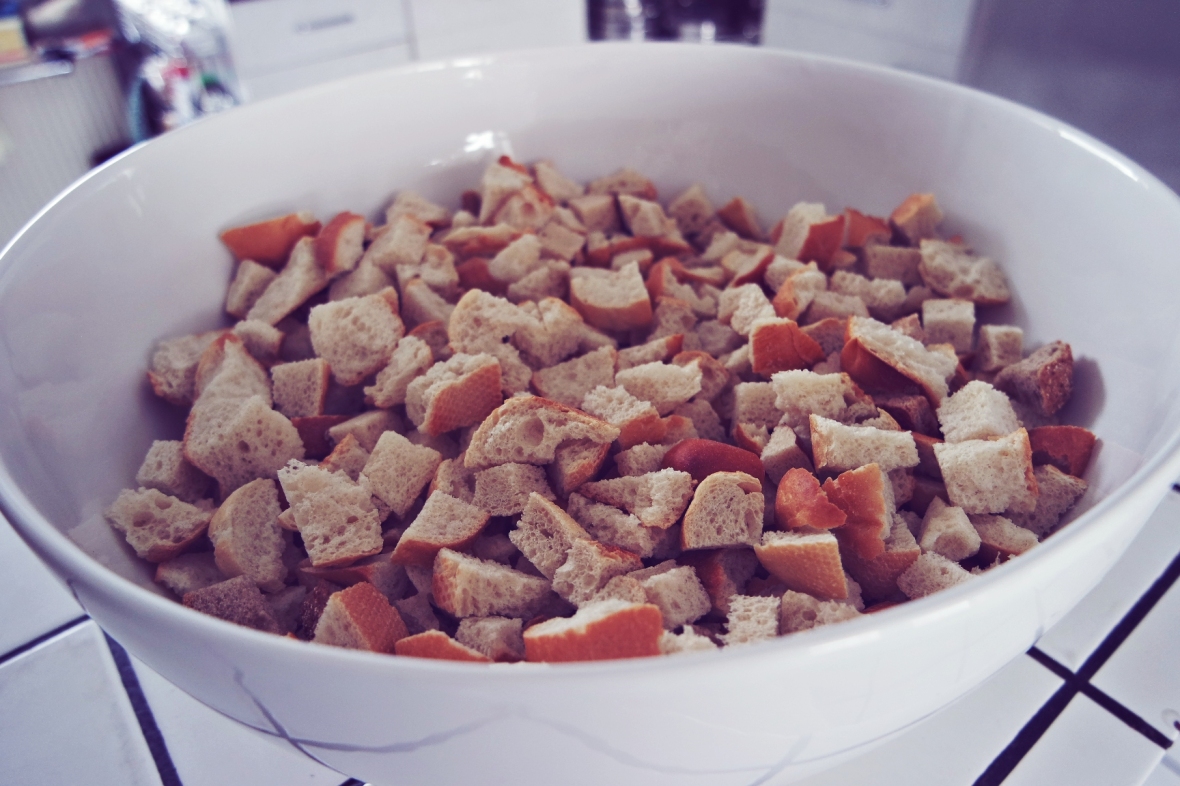 This post is really special because my friend Dagmar has decided to let me tell you all the secrets to her amazing cooking. Dagmar is a talent in the kitchen. She is what I call a slow cook because she relishes creating the kind of dishes that can take days or even weeks to prepare. The creations in her kitchen are nothing short of mini adventures.

Dagmar has been friends with my boyfriend, Mario, for many years. Her husband, Hans Peter, and her have practically adopted him as their own. They spoil him rotten with the finest foods. It’s like family and between them food is love.

I moved to Germany to be with Mario, following a crazy decision making process completely driven by love. I had left my life in Thailand behind and there I was in a new country, with a new man, a new home and a new family circle.

To be honest I was a little nervous about meeting Dagmar. She must have been wondering who was this woman who has stolen Mario’s heart (he had spent the most part of the year traveling backwards and forwards to Asia). If it was me, I would have been expecting to meet a drop dead gorgeous shining star. 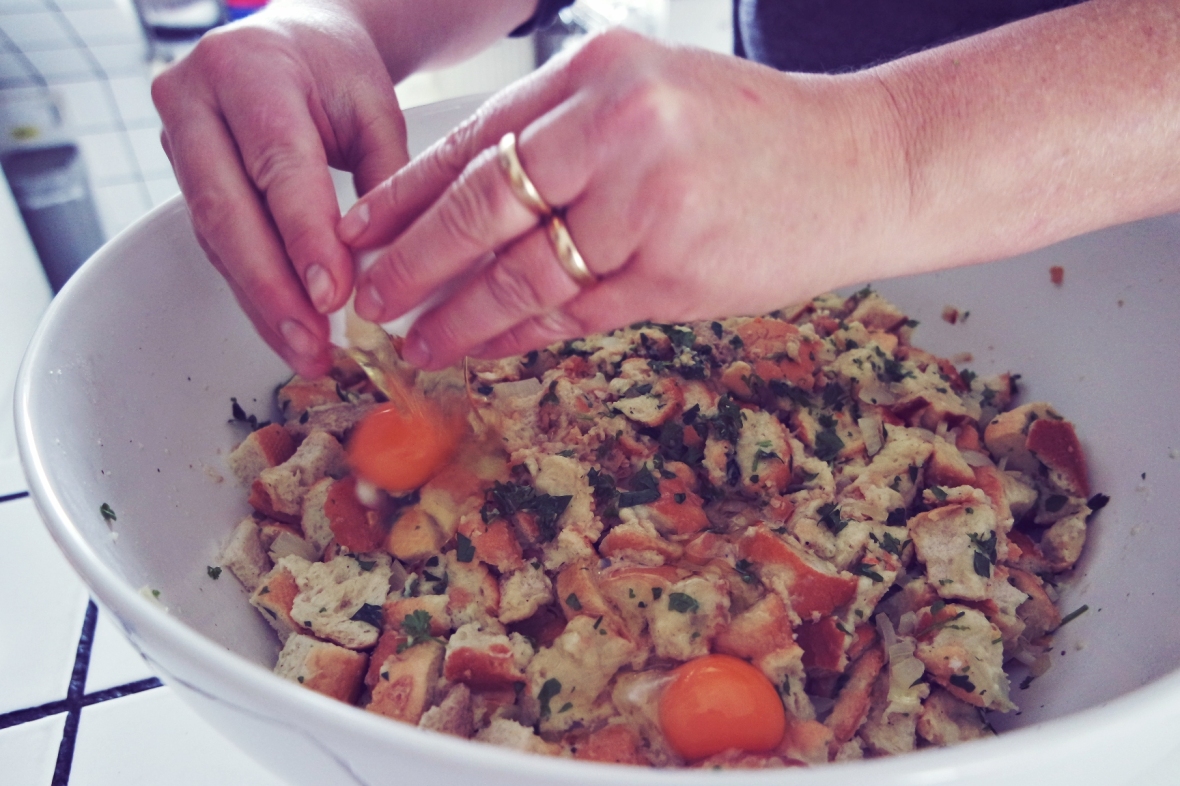 Dagmar invited us over to her home for a dinner. A message came asking whether I wanted traditional German food or something Asian. My thoughts were ‘when in Rome’ so I opted for a German menu and Dagmar came up with a selection of authentic eats. One of those was knoedel (a German dumpling).

There is something about dumplings that make you feel warm and fuzzy inside and when I tasted Dagmar’s knoedel I was instantly transported to my childhood. The soft yet firm texture accompanied by gravy is my ultimate comfort food. It puts you at ease and I needed it. My nerves were saved by knoedel.

We have since spent many a wonderful evening together and now, I too get spoilt rotten.

Yesterday Dagmar wanted to show me how to make knoedel – I am always talking about how it’s my favourite German food of all time. 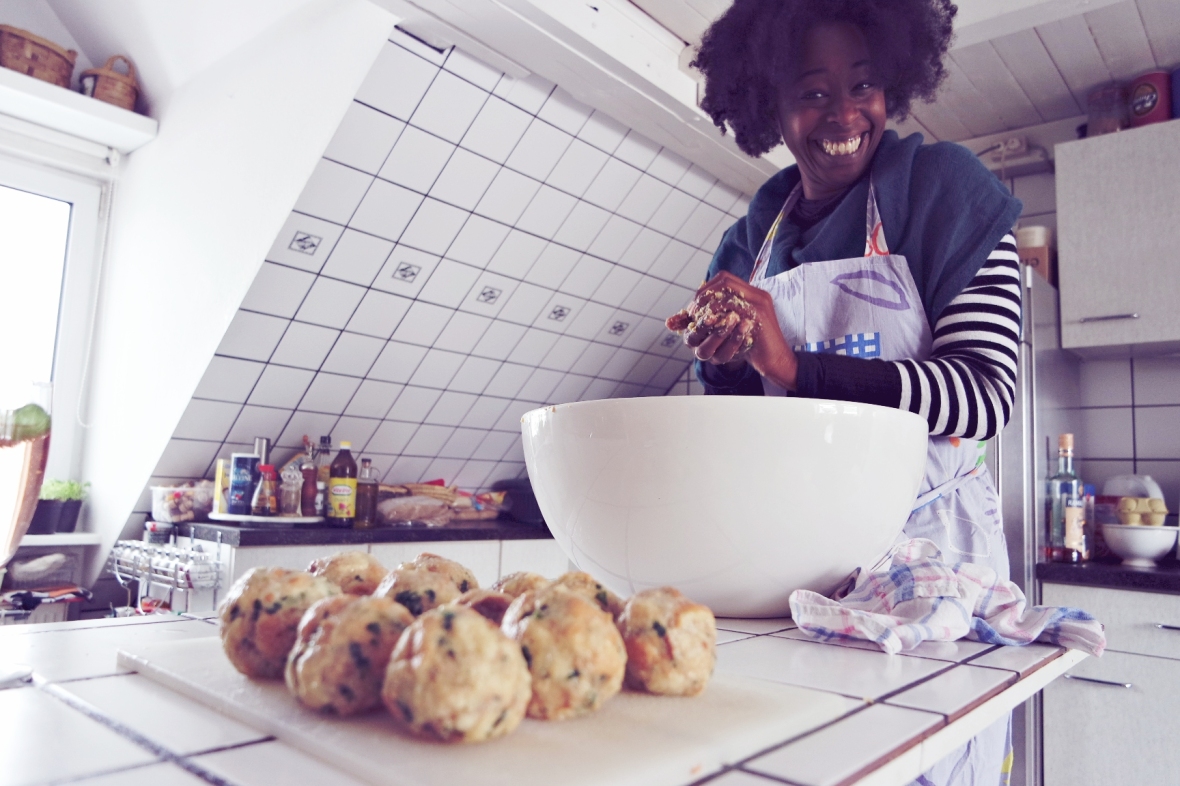 Every culture seems to have a version of a dumpling in their cuisine. In England they are made from dough, the Chinese steam them and fill them with pork and in Jamaica dumplings are fried.

The knoedel I love is a Bavarian invention that uses dried up bread as its main ingredient.

The time consuming part of preparing knoedel comes from the collecting the pieces of bread and drying them. You can use any bread rolls- white, brown, wholewheat or seeded. Cut them up and keep them in a basket or bowl for five days to a week. Make sure you don’t use plastic otherwise the bread will sweat and cause problems.

We used a huge bowl because Dagmar had collected so many bread rolls. About 20. We diced five onions and fried them and chopped up three bunches of fresh parsley. Dagmar said that you can be experimental with other fresh herbs to adapt the flavours. She suggested beer’s garlic or thyme. We sprinkled the mixture over the bread pieces.

We then seasoned a litre of milk with a couple of tablespoons of salt, a few teaspoons of pepper, a vegetable stock cube and we grated a quarter of a nutmeg into it. This mixture was brought to the boil and then poured over the bread to give it a good soaking. We put a towel over it and left it to cool to a touchable temperature.

After that we added seven eggs and then squigded the mixture together. The egg binds the bread together so that you can roll it into balls.

The technique here is important because if you don’t do it right the dumplings will fall apart when you boil them.

The way to do it is squeeze the mixture together into a ball and roll it a few times. Then wet your hands and smooth the surface of the ball seal in the shape.

Next comes the cooking part. Fill a pot with water and add a vegetable stock cube for extra flavour. When the water is boiling it’s time to add the dumpling balls. The water will stop boiling once the balls are in the pan and if it doesn’t turn down the heat slightly.

The balls will expand and float. Turn them so all sides have contact with the  water. They should be ready in 10 minutes.

The great thing about knoedel is it goes with any meat dish. During the winter I love knoedel with lots of gravy or with a stew.

We made 30 dumplings and froze most of them for quick and convenient meals in the future.